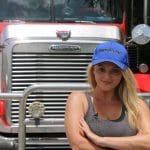 Katrina Alvarado
Co-Founder  - Trucker District
It was a great honor to have had the opportunity to work with and collaborate on Trucker District with Hazem. He is highly skilled, talented, professional and an extremely hard worker and will go above and beyond to deliver a project like he did for us under huge time constraints. Working with Hazem, he took the lead on developing our IOS and Android app and successfully collaborated back and forth with not only myself but also with our web developer, and despite the huge time difference always made himself available to us and worked weekends and late into the evenings. He even went beyond our scope to add a few extra features to the app that made it that much more amazing! Hazem is a truly remarkable person to work with and we are looking forward to continuing to collaborate with him in the near future- I would recommend him to anyone that wants a dedicated, intelligent, passionate and highly skilled developer that communicates well and delivers products that were above and beyond our expectation
Mohannad Hassan
Senior Big Data Enginner  - BADR
Having worked closely with Hazem for almost two years and a half before he left BADR a couple of weeks before this was written, I can say I've had a very good working experience with him. Hazem had a good effect on my progress during this time. First things first. Hazem has a very admirable range of technical abilities. Prior to his leaving, he was serving as a technical lead for both the mobile team and the data visualization team. He has a very good authority on many technologies as diverse as Android and Javascript. He's keen on continuous discovery, learning and self-development. On the personal side, Hazem is one of the people whom can be described as too kind for his own good. It's a lot of exaggeration. But to tell the truth he continuously tries to be friendly with everyone. He prefers to give the space to people and to avoid pushing people and micromanagement. He prefers motivation, encouragement, and reasoning over dictation

Ahmed Lotfy
Software Engineer  - BADR
Hazem is an excellent technical lead person. I worked with him on many projects. He is an active person and open minded. He could achieve success in the complicated projects. He has a lot of experience in Mobil (Android and iOS) and web technologies. He can investigate and fix the more ambiguous issues
Ahmed Sherief El-Dakhakhny
Cofounder at LuxTech Smart Home Automation  - BADR
I have worked with Hazem in many projects in BADR. through those projects he showed great sense leadership and handled great responsibility and work pressure. I learned from him a lot and thankful for the mentoring that he gave me Heba Hosny
QA Manager/ TechWomen Alum  - Founder
Hazem was a fantastic engineer to work with, and is not only a multi-skilled and insightful Technical Lead, but also an inspiring strategist. Very good developer. A great employee with a very strong problem solving skills. Hazem is a great asset to any company.
M Sohail Safdar
PPC & SEO  - Nimble Web Solutions
Hazem is knowledgeable and a great problem solver with great communication skills. He is very committed to his job and will not stop until desired results are achieved. He is full of positive energy and the person you can depend on. Always enjoyed working with him and would love to work with him in future if given the opportunity Ahmed Fathi Elgaly
Lead Software Quality Engineer  - Confidentiality
Hazem is a committed person, who would really do his best to deliver the desired results and work hard until he finishes what is required from him. He is person who you can trust that he will get your job done, he also very helpful, with a very good leadership skills
Ahmed Adel
Development Team Lead  - BADR
I had the pleasure of working with Hazem for many years at BADR. Through the years, we delivered various projects and on different roles. Working at a startup is very challenging, however I was impressed by his manner of doing a great job and his ability to handle even the toughest tasks with commitment to success. He is a truly remarkable person, motivated and future-thinking plus having lots of knowledge in the field of Software Engineering

Mahmoud El-Naggar
Senior Android Developer  - BADR
Beside Hazem's wide rang of technical skills like Android, iOS, Node , React , Angular ,CI and others , He also has a great Management and leadership skills , He know how to manage and help his team to get things done right and on time. and sure I'll recommend him to anyone needs a responsible person with such skills to get the things done.
Mohamed Adel
Ceo  - Duot.io
One of the few people you'll feel blindly comfortable following as a leader. Hazem ignites any team with positive energy, and can help teams and entities communicate in a better way. Regardless of the project domain, constrains or team, he always help pushing members beyond their best in the most friendly and neat manner. It was enlightening meeting and working with Hazem, and I hope I can be on one of his teams in the future Tareq Salaheldeen
Software Development Engineer  - Amazon
I worked with Hazem in many projects. he is one of the smartest software engineers I have ever met. He is very fast learner, provide creative solutions and his code is very organized, optimized and clear also he is open-minded. He is an excellent manager and mentor, he is supporting everyone in his team and outside his team, he has an excellent balance between social live and working also he helps his colleagues to achieve that in their life.
Jason Moore
CEO  - Elite HRV
Hazem cares deeply about doing quality work. He is always improving, learning, and trying new things. He has great communication skills and a hard work ethic.

Jason Hogrefe
President  - MacAppware
Hazem is an excellent software engineer who has always delivered applications to me exactly as my requirements demanded. He was always eager to fix any issues/bugs that appeared to make sure what he delivered lived up to my high quality standards. I highly recommend this talented and experienced software engineer!
Mohamed Nabil
Marketing Consultant, Founder at Silver Arc  - Silver Arc
Hazem is a passionate team player, with a "Can Do" attitude, he's committed to mastering the latest innovations within his field, acquiring managerial skills, and boosting his team's spirit. During my work with Hazem, he reported in a timely manner, and utilized his skills to serve our Marketing and Business Objectives. Jim Longo
Vice President of Product Management at HighWire Press, Inc.  - Highwire press
I had the pleasure of working with Hazem on the Seeloz project for nearly a year. Hazem is a gifted engineer who can absorb a large amount of user requirements and translate them rapidly into working code. He demonstrated a wide depth and breadth of technical knowledge. His great demeanor and good humor are added benefits of having Hazem on any development team. "
Ahmed Youssry
Software Development Engineer Intern at Amazon Web Services  - Amazon
Hazem was my mentor during my internship at BADR. He is a great mentor as he was really helpful during my learning phase. He made the improvement of my skills his priority. Also he improved my self-learning techniques as he did not give me answers to all my questions but rather pointed me to the right direction. Nesma El Marassy
chief executive officer at Q-Vision  - Q-vision
he is the one who taught me native android. he's so talented and he know how to give the most complex knowledge by the easiest way thanks for being my teacher
Mostafa Bakr
HR Manger  - Badr
Strong motivation, discipline, professionalism, dedication, commitment and focus. These qualities automatically spring to mind when Hazem is mentioned. Hazem is a great talented software engineer his knowledge and patience allowed him to do what no body can do and touch the sky with clean hands. Mohamed ElSammak
Senior iOS Developer  - Modeso
I worked with Hazem when we were students in many project and in the same group. He was vey hard worker and dependable. He also has the leader character that enables him to lead the group in many projects and it ends with high grades and bonus.
Abel Rahman Karim
Development Unit Manager  - Q-vision
Hazem is by far the most experienced mobile developer that I have ever worked with !! Few months ago he gave training to our developers team about developing Mobile applications , and he did a great job , providing a real training and consultation service that one can't easily find these days Ahmed Said
Head of Web Technologies at Modeso  - Modeso
A highly skilled software engineer detailed oriented and a great lecturer with a great knowledge in Android development .
Mohamed Salah
Web Developer  - Badr
I worked with Hazem in many projects, he has all the qualities of successful leadership, he is very fast learning and doesn't give up easily. During my learning period he was my mentor, he didn't give me the information easily he was always teach me how to get it. For me he's the best supporters and helpers, I've learned a lot from him. The best skill he have is his communication skill Mostafa Ali Elganainy
Product Manager  - KACST GIS
Hazem has a high level of commitment to the tasks at hand, he didn't gave up easily on hard problems, and didn't mind spending up the whole night chasing and fixing problems to catch a tight delivery deadline.
Hesham Khaled
UI/Front-end Developer  - Wirecard AG
Hazem is a great software engineer. He is a solid developer and doesn't hesitate to tackle tough problems. He has a positive attitude.I consider Hazem as one of the sharpest software developers I have seen in a long time. Ahmed Elabbasy
Engineer  - MircroSoft
I worked with Hazem on a couple of web projects, and during that time he was the go to guy when something wasn't right. He never had a problem getting his hand dirty in someone else's code and he always provided the team with creative solutions to the problems we face which showed how solid his skills and education are
Hussein EL-Sayed
Senior Software Engineer  - Badr
Hazem is a passionate software engineer that always try to learn from his leaders at work and also consider to be a good leader .He also has great knowledge and find innovative way to solve problems with high performance , Hazem show an extraordinary dedication and belief in what he is working on. Strengths: Web Development, php, JavaScript, PhoneGap, Flex & ActionScript Hassan Zaki
Senior Software Engineer  - Seeloz Inc
I can recommend Hazem as a person with great education and deep skills of business solutions. Detail oriented strategist. His open-minded approach could not be overestimated. His technical knowledge are brilliant, has deep recognition in systems and communications.
Alexander De Ridder
Technology Entrepreneur  - Edgy Labs, LLC
Hazem is a good developer. He learns quickly and delivers good work. He has extensive knowledge of adobe flex, but when the ecosystems changed, he quickly adapted to new development environments, proving he has a solid education and is a well-rounded developer. He currently works as a web application specialist supporting and continuing development of an enterprise level platform for content creation, management and distribution.